So if I need 20 hexagons and 12 pentagons for a full sphere how many connecting panels do I need…??
Um… 90! Plus 8 bolts per panel and 8 locking washers too, 1440 little pieces to lose!

Well, bolts and washers are cheap and mass produced so this isn’t a major, major concern. Needing 90 panels though (85 with the top off) is pretty huge since they all have to be produced on spec. The panels were a compromise I came to when I realised bending the panels would be 1. difficult 2. expensive 3. harder to ship. despite the fact that I could cut the major parts to 2 items.

So I brushed my teeth and typically get ready to sleep only to have an idea that means I have to get up again and start drawing pictures and figuring out if my idea is a good one.
Well it is!

The panel gets laser cut to shape and then stuck in a mould to be pressed into shape, hopefully punching out the holes at the same time. The mould is expensive but once it’s made the cost is divided across every part that comes out of it, so the trick is getting it to do more work. So instead of making loads of connectors we put them into the panels. 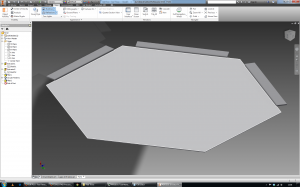 My apologies if you’re thinking ‘well…. duh!’ but it wasn’t so obvious to me right away. Now the question is whether we can lose all the connectors completely?
Extending five sides of each hexagon works reasonably well but isn’t perfect but we can quickly see that we’ve cut down the connectors by more then 50% a long with all their ‘vitamins’ (what we call nuts/bolts etc in the 3D printing world).
The count is someone complicated by the fact that I’ve thrown half hexagons into the mix but I think 3 tabs on the hexagons and 2 tabs on the pentagons might cut the connectors down to about a dozen. This is quite a lot.

Now I made some 3d drawing files to send out to some British firms for quotes so do I send them or retweak the design…? again :p